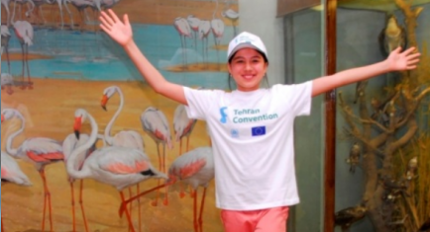 Objectives of the project included the organization and performance of the coast-wide awareness campaign in Turkmenbashi and Awaza area devoted to the Caspian Sea Day celebration. The project was prepared and agreed with the program of Celebration with the Ministry of Nature Protection of Turkmenistan, which supposed to be held in hotel “Dayanch” on the Caspian coast. The events were planned for August 10-11, 2012. However due to force-major reasons, upon arrival of participants of the event to Turkmenbashy city, the organizers were asked to postpone the event. It was decided to perform it in Ashgabat at the premises of the Institute of Deserts. Due to the summer beach time, it was impossible to change tickets and go back to Ashgabat earlier. Thus the Caspian Day event was then again prepared and performed in Ashgabat.