NCAP is meant to represent a set of actions as well as guiding activities envisaged to put in effect the relevant provisions of the Framework Convention on the protection of marine environment of the Caspian Sea.

While NCAP is considered to be mainly the action–oriented document it should also leave a reasonable margin of flexibility to enrich the list of actions in the course of implementation process, as needed, without any harm to its directing nature and guiding specificity.

Its characteristic aspect is to qualitatively achieve the implementation of actions and guiding activities to serve the objective of the Framework Convention with due regard to the SCAP which equally follows the same purpose.

To understand this unique relationship among NCAP-SCAP-Framework Convention one may draw the attention to another point. Framework Convention is an indefinite legal document, contrary SCAP has its time frame. Thus, the completion of duration of SCAP will not necessarily entail the automatic senselessness of adoption of NCAP for the purposes of the Framework Convention while if the latter expires its time of effectiveness such an NCAP will loose its meaning.

Last but not the least, NCAP is mostly action-oriented document with concrete targets. Against this background, SCAP mainly sets strategy for the implementation of Convention leaving aside the margin of appreciation for the detailed actions and activities for each State-Party’s national actors and their counter-partners.

Geographic scope of NCAP accords with the scope of application of the Framework Convention and SCAP, respectively. Framework Convention in Article 3 defines marine environment of the Caspian Sea, taking into account its water level fluctuations, and pollution from land-based sources as areas for application. Article 26 (implementation of the Convention) mentions Contracting Parties’ territories and areas under their jurisdiction for the implementation of the provisions of the Framework Convention. To this end, proceeding from Articles 3 and 26 read in conjunction NCAP is to be realized within national boundaries on the land and in the Caspian Sea, e.g. within the territory and under the jurisdiction of the respective State-Party, accordingly.

Prevention, reduction and control of pollution

While Protocol on Land-Based Sources of Pollution has been recently finalized at expert level but has not been yet signed neither entered into force, this does not preclude States Parties from taking actions about prevention, reduction and control of pollution of the Caspian Sea, especially those from land based sources and activities pursuant to the Framework Convention.

Protection, preservation and restoration of the marine environment

The fact that the EIA Protocol has not been yet part of the international legislation for the State-Parties to regulate the activities in and for the Caspian Sea’s marine environment should not affect the relevant actions at national level.

Articles of the Framework Convention from 17 to 21 are of procedural nature. However, it has been a stand-point that while drafting the NCAP certain actions and activities might relate to procedures which is very advisable. It is true that many of such actions have to be realized mutually. Cooperation in developing protocols (Article 17(3)), cooperation in formulating, elaborating and harmonizing rules, standards, recommendations, practices and procedures (Article 18(1)), cooperation in the conduct of research (Article 20), as well as exchange of information (Article 21) encourages States-Parties’ national actors for common or mutual\joint actions. Thus, it is correct that those actions that are envisaged in previous Chapters do not necessarily need to cover procedural issues. However, it might be also advisable to touch upon the procedural aspects of foreseen actions and activities in relevant part(s) to put them under the comprehensive focus. Therefore, at the next stage of writing a full-fledged NCAP paper this very pertinent point will be taken into due account.

NCAP vs. NPPS or action vs. strategy

National Public Participation Strategy is a priori strategy setting paper. It can be qualified as a part of NCAP since its legal as well as formal standing derives from the Framework Convention. Here, the most important question that might logically arise is whether or not strategy setting paper can be part of paper of action-oriented nature? The answer is that while NPPS is about the strategy how the public will participate in relevant process and to which extend it equally presumes the forthcoming actions according to the strategy defined in advance.

At the same time, the degree of generalization or concretization of various parts of such a paper will a posteriori much depend on the national preferences and priorities of civil society actors.

To this end, aim of the NPPS is to ensure the participation in the environmental processes countrywide/regionwide by the public through the broad awareness-raising consistent with the relevant provisions of the Framework Convention on the protection of marine environment of the Caspian Sea and the Strategic Convention Action Program.

“The Contracting Parties shall endeavour to ensure public access to environmental conditions of the Caspian Sea, measures taken or planned to be taken to prevent, control and reduce pollution of the Caspian Sea in accordance with their national legislation and taking into account provisions of existing international agreements concerning public access to environmental information”

SCAP is a guiding paper for the purposes of NCAP drafting. Henceforth, it also serves formal basis for NPPS.

Moreover, to the extend of relevance other applicable international agreements in force concerning public access to environmental information to which country in question is a party and national legislation are amongst the legal basis for NPPS.

NPPS as a part of NCAP should benefit from concretization observed in NCAP’s content. It has to identify the non-exhaustive directions for actions to follow, thus enabling to supplement the suggested directions with new one. NPPS has to be complementary to NCAP and they have to be mutually reinforcing.

NCAP is an action-oriented plan. It includes the targets and envisages the concrete results within the anticipated time-frame. Nevertheless, it is not supposed to provide an exhaustive listing of all possible actions. Convention Action Plan is of progressive nature and represents the current momentum of evolving process. Therefore, it does by no means exclude other additional actions deemed necessary for the purposes of implementation of the Framework Convention. It leaves all further deliberations and decisions thereafter for the national players to take in order for better advancing the large Conventional process within national boundaries both on land and in the Caspian Sea.

One should always bear in mind that the most important thing what counts is an action and result. Marine environment of the Caspian Sea necessitates such an action or a set of actions and activities in the sea and on soil. Thus, it is logical to conclude that NCAP is a minimum of what the national actors might do. It is presumably bottom line of large and constant process at national level directed towards meeting Conventional streams.

Toxicity tests are commonly used as a tool to determine the standards of water quality for chemicals and to discover appropriate organisms as bioindicators in toxicological studies, and also could be used as an essential tool for evaluation of the pollutant effects in aquatic ecosystems. The aim of the present study was to evaluate the sensitivity of two Caspian fish species, Caspian trout as an endangered species and Caspian Kutum using the static acute toxicity in response to nonylphenol, which is widely discharged into the Caspian Sea environment.The fish were exposed to various concentrations of nonylphenol for 96 hours to determine the LC50. The experimental nonylphenol concentrations were consisted of five exposure groups for each species: 100, 150, 200, 250, and 300 μg/l for Caspian trout; 400, 800, 1200, 1600 and 2000 μg/l for Caspian Kutum, with a control group for each of them.Using probit analysis, the 96 h LC50 of nonylphenol to Caspian trout and Caspian Kutumwas determined to be 204.78 and 1262.36 μg/l, respectively. In addition, Caspian trout was approximately 6 times more sensitive than Caspian Kutum. Nonylphenol was reflected to be "highly toxic" to Caspian trout and "moderately toxic" to Caspian Kutum. The results could be considered in preparing plans for conservation and restocking management of Caspian Kutum and the endangered Caspian trout.

Overview of oil and natural gas in the Caspian Sea region

This report analyzes oil and natural gas in the Caspian region, focusing primarily on the littoral (coastal) countries of the Caspian Sea (Russia, Azerbaijan, Kazakhstan, Turkmenistan and Iran). A discussion of Uzbekistan is also included. While not a Caspian coastal state, a considerable amount of Uzbekistan's territory, along with its energy resources, lies in the geological Caspian basins.

Aside from Azerbaijan's oil production, the Caspian Sea largely was untapped until the collapse of the Soviet Union. With several newly independent countries gaining access to valuable hydrocarbon deposits, the different countries have taken diverging approaches to developing the energy resources of the area. At the same time, the lack of regional cooperation between the countries' governments and few export options for Caspian hydrocarbon resources have slowed the development of Caspian oil and natural gas resources.

The combination of foreign investment and rising energy prices allowed the coastal countries to shift from diverting oil extraction for local use to supplying both regional and world oil markets. The ability of countries to export greater volumes of Caspian crude oil and natural gas will depend on how quickly domestic energy demand rises in those countries, how quickly they can build additional export infrastructure to global markets, and whether expensive projects to develop Caspian resources can attract sufficient investment.

he statistical pocketbook gives concise information related to social and economic development of Russia in 2012 as compared to the previous year.

The information is presented in accordance with the data of the Federal State Statistics Service and other ministeries and agencies of the Russian Federation.

2012 data on some of indicators is preliminary and is subject to further revisions. 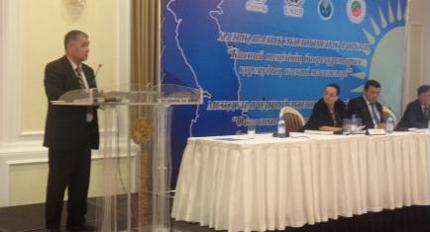 Aktau forum on the problems conservation of the Caspian Sea biodiversity

The Forum is the first event held in the framework of theDay of Caspian Sea celebration .

"Oil and gas offshore fields' development, which is beingcarried out at difficult geological conditions, increases man-caused impacts on environment of the region and creates real emergencies, including oil spills, as hydrocarbon deposits are located in an ecologically sensitive area of ​​the sea. The consequences of possible industrial accident capable of impacting the territories of neighboring countries", said Bapy.

According to his words, for monitoring of oil fields in thenorth-eastern part of the sea, there was established the North Caspian ecological base for oil spill response. "Ak Beren" blowout response group specialists are annually trained in the UK.

Attached documents
Cooperation and safety – The basic principles of work of OSCE in the Caspian Sea region
Information about seaport Aktau activity opportunities and undertaken measures for protection of the Caspian ecosystem
Activity of the North Caspian Consortium in the field of environmental protection and biodiversity preservation
Condition of stocks of water bioresources of the Caspian sea and environment of their dwelling
Ecological situation northern part of the Caspian sea by results of monitoring Mangistausky area
Metadata
Country:
Kazakhstan
URF Category:
Biodiversity
Year
2013

The Statistical Yearbook of Iran contains the latest statistical information available on economic, social and cultural areas of the country to meet the statistical data needs of the local decision makers, planners and researchers, as well as all other interested users. The Yearbook was first officially compiled in the year 1345 and has been released regularly.